What Impact will social value have? 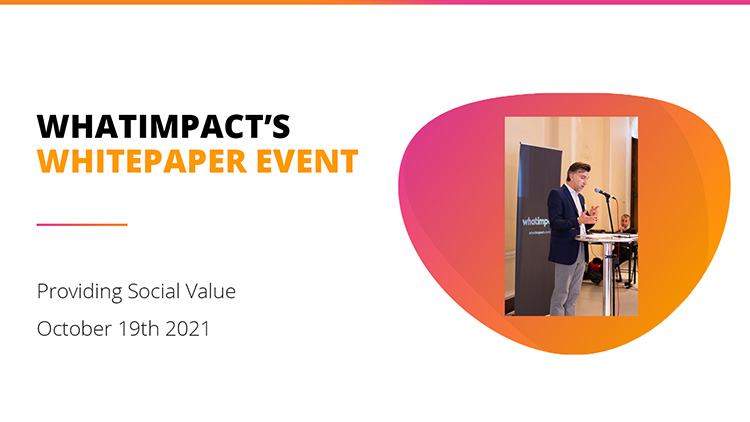 Social value is not just important because the Cabinet Office say it is, but government departments, suppliers and indeed, the charities who stand to benefit most from the Social Value Act (and the changes introduced by PPN 06/20) are still unsure of the practicalities of Social Value initiatives. Fortunately, WhatImpact are helping all stakeholder groups to understand how to embrace Social Value and build it into their procurement processes.

A bit of background

Back in 2012 the Public Services (Social Value) Act was introduced to emphasise the importance of social value as part of any public procurement exercise. Broadly speaking it encouraged focus on economic, social and environment concerns wider than the specifics of the item being procured. Earlier this year the Procurement Policy Note (PPN) 06/20 took the advisory nature of the 2012 Act to making the assessment and inclusion of social value objectives a mandatory aspect of the procurement process.

“Social value should be explicitly evaluated in all central government procurement, where the requirements are related and proportionate to the subject-matter of the contract, rather than just ‘considered’ as currently required under the Public Services (Social Value) Act 2012.”

Social Value is now an essential topic for the public sector and suppliers (like us) to government, but there is a lot of confusion about its practical application. It is also becoming increasingly apparent that the effect of PPN 06/20 is further reaching than simply central government procurement.

In October, we were lucky to be invited to WhatImpact’s Social Value event, where they shared the findings from their latest whitepaper which focuses on the real-world impact of PPN 06/20 on both ‘supporters’ and ‘recipients’.

Our key take-aways from the event

An engaging and informative afternoon

It was a fantastic event aimed at educating companies and charities on social value and how social value can be provided without the absolute need for a monetary contribution from a company.

“Moving beyond philanthropy includes understanding giving and social impact as a collaborative process rather than a pure act of “goodwill.” Understanding “giving” at an organisational level in this way should always mean working with the idea of shared goals in mind.”

The event began with an introduction hosted by Marcus Jones (CCO) followed by Tiia Sammallahti (CEO & Founder) who shared the history, journey, and vision of WhatImpact. To conclude the presentation, a “ted talks” style insight was given by Auni Siukosaari (Communications Manager) who introduced the key findings of the whitepaper. 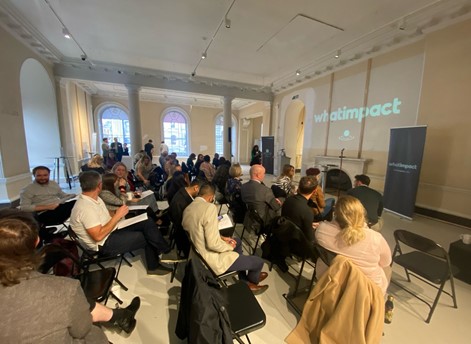 It was interesting to hear the different views on how the commitment to social value was impacting the key stakeholders. It was heartening to hear how the importance of activities over and above pure financial contributions were now being embraced – despite the difficulties that it brings in terms of accounting and ‘valuation.’ And that finally that the qualitative impact of work with charitable organisations is being taken seriously, and valued even higher than mere financial contributions.

“Understanding the importance of setting impact goals, measuring the outcomes and reporting on them in a comparable and transparent way.” 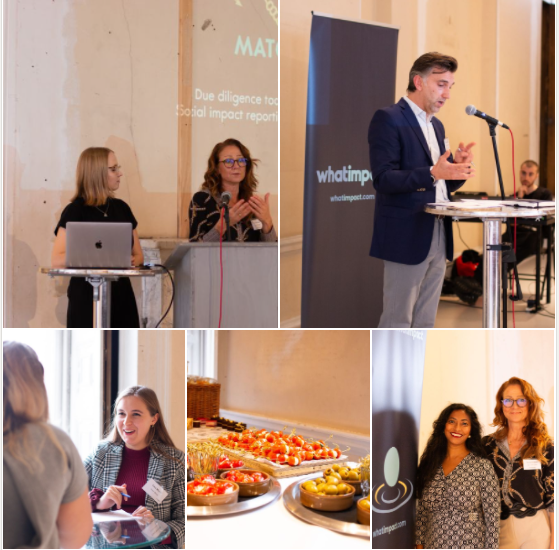 The talks were then followed by a “Speed Matching” activity where companies/grant makers got to meet 5 charities for 6 minutes each based on details that we had provided prior to the event. For us, it gave us a chance to talk to several types of organisations and to get a better understanding of common themes of areas where they would find greatest benefit.

We were delighted to find that most of the charities we spoke to, needed marketing guidance and assistance with content creation, areas where our teams' skills would bring more benefit to the charities than mere financial contribution. Indeed, skills-based contributions are something that can ensure all companies can get involved at a level they may have previously not thought possible.

At the conclusion of the “speed matching,” the floor was then open for everyone to chat. This was a perfect opportunity to connect with charities who we had the chance to meet during the speed matching and talk to other companies and hear about their plans on how they are going to provide social value and work in partnership with charities on-going rather than as a singular donation.

The step-change resulting from PPN 06/20

Social Value is not a new concept, but the change in emphasis and the requirement of public sector organisations to understand and support contributions to society in a wider context when making any form of public procurement has changed the way that both supporters and recipients view their social value related activities.

The step-change of businesses and charities (supporters and recipients) to work in partnership on strategically aligned goals for mutual benefit represents a new way of thinking about CSR and social value. And at e-shot we are proud to be part of this change.

WhatImpact can tell you more

For those of you that did not have the opportunity to attend the event, there is some fascinating insights to be found in WhatImpact’s whitepaper, which is available to download

*WhatImpact is a matchmaking marketplace, connecting companies and grant-makers with charities and social enterprises efficiently and transparently.