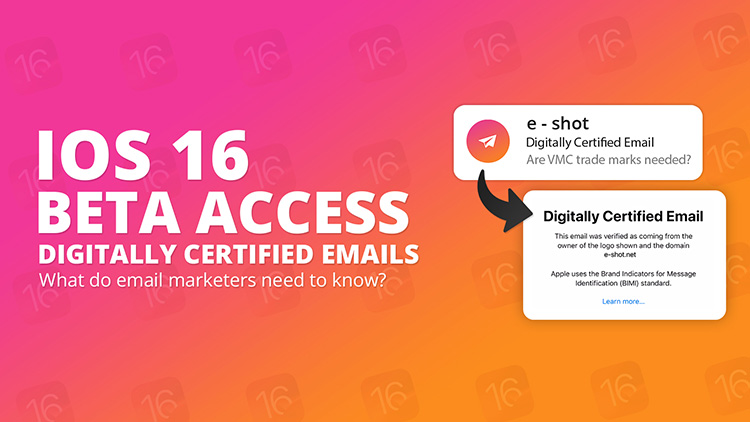 Whilst it seems that this new development is predominantly being celebrated by those in the know, confirmation that the IOS16 update which will be released around October will include support for BIMI.

Last month we saw the addition of the apple logo to the BIMI Group infographic showing the mailbox supporters. But unless you were an eagle-eyed follower of the site this early indicator may have easily passed you by. 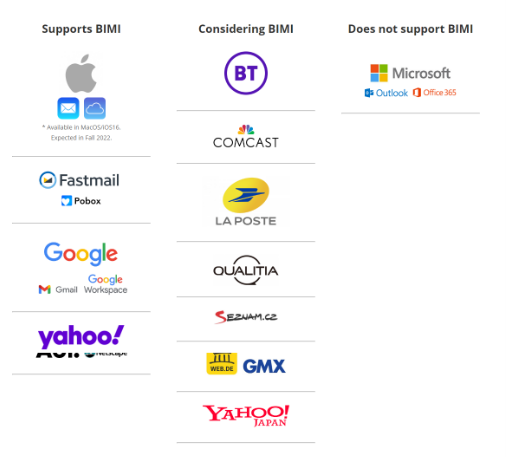 Indeed, the first time the information seemed to be published in a more mainstream media was through a tweet from one of Apple’s registered developers who was amongst the first tier of developers to get their hands on the early Beta version. 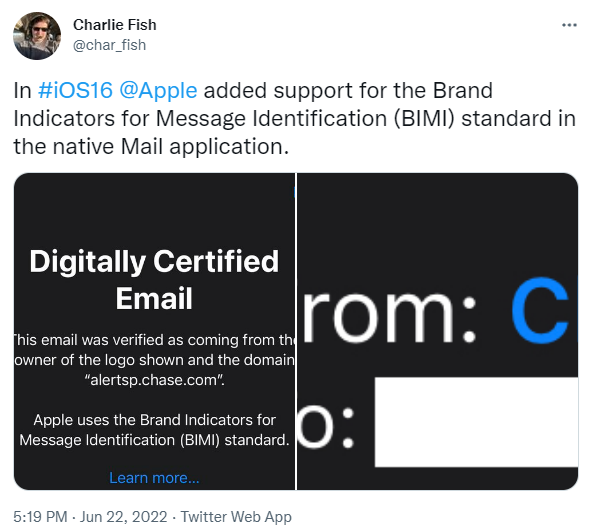 On 11th July the Beta version of IOS16 was publicly released, so we have had a look ourselves and have indeed seem the Digitally Certified Email feature in action, we also spoke to BIMI expert Al Iverson, Director of Deliverability Products and Services, Kickbox, Inc. about his view of the news:

“This new development really does feel like BIMI has hit the big-time. Although there have been whispers of development within the Authenticators Working Group and the wider BIMI community, Apple, unlike other developers like to keep their planned developments close to their chest until they are ‘fully-baked’.

With Apple’s market share being as it is – they effective own the majority of eyeballs that view email through their device market-saturation. It remains to be seen how far their support of BIMI will go, as the beta only shows in the native apple mail environment but given their recent MPP developments apply across all domains we would strongly hope that their certification development stream would follow suit.

Of course, I am not part of the apple development team so I cannot comment authoritatively if there are any technical limitations that would hamper the strategy – but it would make sense that this forms part of their wider commitment to their customer’s online security”

From our investigations, it would appear that Apple is following suit with Google in requiring a Verified Mark Certificate (VMC) which requires that your logo is officially trademarked, and you will need to go to DigiCert or Entrust, the trusted certification authorities to register a VMC with them.

But this regime presents a challenge for certain groups of email senders, both large and small. For the smaller senders the ongoing financial commitment to spending $1,000 a year to maintain a VMC is a significant barrier to entry.

Equally, for non-business senders who have their logos and trust marks protected through an alternative legal mechanism to the standard trademark are also disadvantaged i.e. government senders and authorities. However, we are aware that there is an on-going project to enable Gov Mark VMCs and indeed it is included in the latest BIMI guidance documentation, which we are investigating with great interest.

With apple there is also no clear way to circumvent this requirement (unlike with google where you can effectively create a “fake BIMI” by using the google profile settings).

So, for those looking at preparing for Google and obtaining a VMC the situation is as it has been.  With a key thing that needs to be highlighted – which is something that causes the most difficulties for those adopting BMI is ensuring that the logo .svg is correctly followed, as this is specific for use in BIMI – many people are making the mistake of trying to employ bitmap logos that do not work correctly in this scenario.

The BIMI file must be created adhering to the BIMI specification. You can find help in https://bimigroup.org/svg-conversion-tools-released/

There is no denying the fact that Apple's adoption of the BIMI standard will mark a significant step-change in the overall adoption of BIMI by big brands. Considering 68% of consumers stated that brand recognition is the most important factor in determining whether or not to open an email, apple’s move increases a level of urgency to become BIMI-certified, and get their trusted, registered brand mark into their customer’s email inbox.

We, like many others, will be watching closely to see how these authentication measures go further to influence general consumer/mass populous understanding and change the narrative around email; helping restore trust in the inbox.